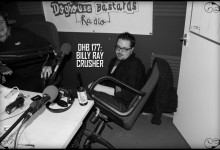 Wow, so this one is going to swing you one of two ways. You’re either going to belly laugh along with Scott, Lurch and Steev, or you’re going to quit the show in disgust at how horrendous we’ve become as people. And you know what? I wouldn’t even blame you. This is certainly not a show I would use as a showreel piece to promote what we do here.. No, it’s more like that dirty, degrading chat you have with your pals when you think that nobody else in the pub can overhear you..

So with that said, thanks for sticking around while you did!

Find us on iTunes : http://itunes.apple.com/gb/podcast/the-doghouse-bastards/id418987812

Show intro music used courtesy of ‘ElevenEleven’, a five-piece post hardcore band from the North East of Scotland, hailing from the increasingly vibrant Aberdeen rock scene. Find out more about them over at – http://officialeleveneleven.bandcamp.com/